In Santiago de Compostela as well as in other cities of the Galicia region: Vigo, La Coruña, Betanzos… one of the typical dishes from the Spanish cuisine is the pulpo a feira.

It may be the most famous dish of the magnificent Galician gastronomy and it is better known in the rest of Spain as pulpo a la gallega. Although it may be the traditional dish from this autonomous region, its consumption has spread through Spain as a tapa, so if you are undertaking a course in any of the many Spanish schools in Spain you can not miss the opportunity of trying it. 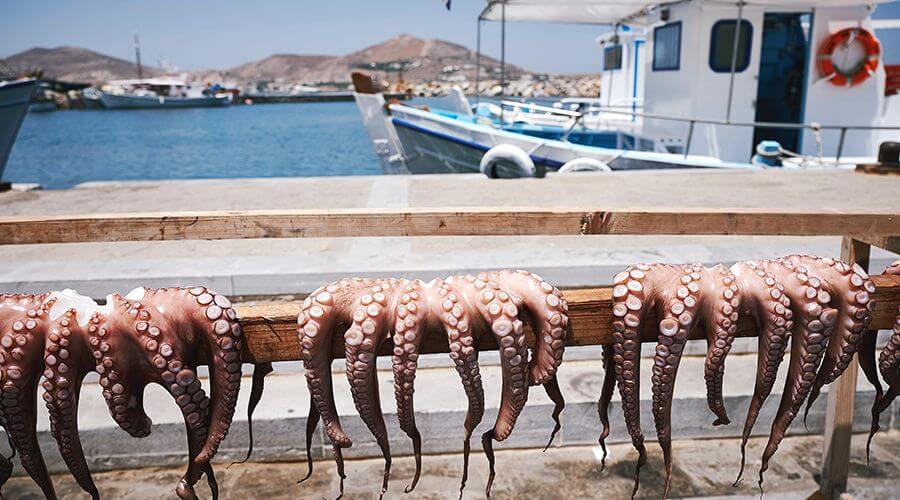 Even if it is known in Spain as pulpo a la gallega, its original name is  pulpo á feira or polbo á feira,  a name it was given because of its presence in all festivities, ferias, and romerias in Galicia.

There are many ways to prepare the octopus, but the most recognized one is to cook the octopus in a copper pot as can be seen in traditional pulpeiras, the name given to women who cook the octopus outdoors with their pots. After it is cooked, the octopus is cut in slices and served on a wooden chopping board with olive oil, paprika and cooking salt.

It is a typical dish for Feria periods when Galicians and tourists have it very often, and the octopus is the main ingredient in many gastronomic events in Galicia. The most outstanding event is the Fiesta del Pulpo de Carballiño in Ourense (second Sunday of August). More than 60.000 people go to the celebration every year and consume around50.000 kg of octopus in one day, as it is believed you can eat the best octopus from Galicia in this province: the only one out of four not to have coasted in the region.

If you are undertaking a Spanish course in a city of Galicia, you can make the most of it and even prepare this dish. Many Galician towns have a Sunday every month when the pulpeiras go on the street to prepare the pulpo á feira.

The pulpo á feira, the most famous in Galicia
Rate this post!