The Temple de la Sagrada Familia may have served as Cesar Pelli’s inspiration for designing The Petronas Tower in Malaysia. To many, this unfinished masterpiece of Antonio Gaudi may catapult as one of Barcelona’s great wonders. Gaudi started working on the Cathedral in 1833 until it ended abruptly when a tram accident took Gaudi’s life in 1926. 120 years after his death, the construction continues aiming to achieve the height of Montjuic Mountain at 564 feet/172 meters, hoping to realize its completion in the next 40 years as planned. 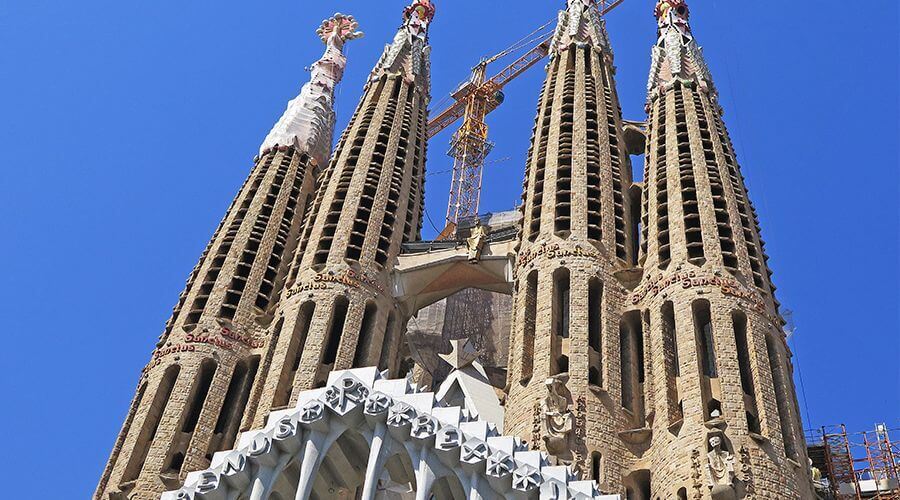 The Temple de la Sagrada Familia celebrates the Mystery of the Life of Christ and the brilliance of the artist who wanted to capture them all. The cubist modern figures of saints and natives were all lined up in a magnificent façade. Everything is molded into perfection, from the overarching windows embracing the building, yet opening their arms to welcome the rays of the sun inside the church, to the spires racing towards the sky like hands reaching up to the heavens.

The interior exhibits the story of the Fall of Man, with the serpent alluring Eve, which can be seen at the foot of the innermost column of the Portal of Charity.

The Temple de la Sagrada Familia exemplifies excellence even in the simplest column therein. Each column is a remembrance of the grandiose that was Greece, indeed. The columns resemble the reassuring hands of the Creator, each made with both meticulousness and magnificence. On another perspective, the lines of fresh flowers in stones joining the pillars together can be seen as fingers closed together in prayer.

Near the Portal of Charity is the Portal of Faith with pictures of Christ preaching as a teen and around him were grapes and wheat. The Portal of Hope, on the other hand, displays animals and plants from another significant place, the Nile.

The profundity of the Cathedral is never enough to explain the mystery of Christ. The attempt to capture Christ’s Life and Ministry in the facades of the Church is nothing but an enormous task. Gaudi until the time of his death hoped and wished that somehow through his craft, he can share his faith with the people of Barcelona. His ardent desire to preach the Gospel is evidently embodied in the renowned structure.