The Spanish product of excellence, the best delicacy for the palate, the king of Spanish gastronomy, beneficial for the health…is the Iberian ham. It is possibly one of the most consumed products in Spain and the most searched for by tourists coming to our country. 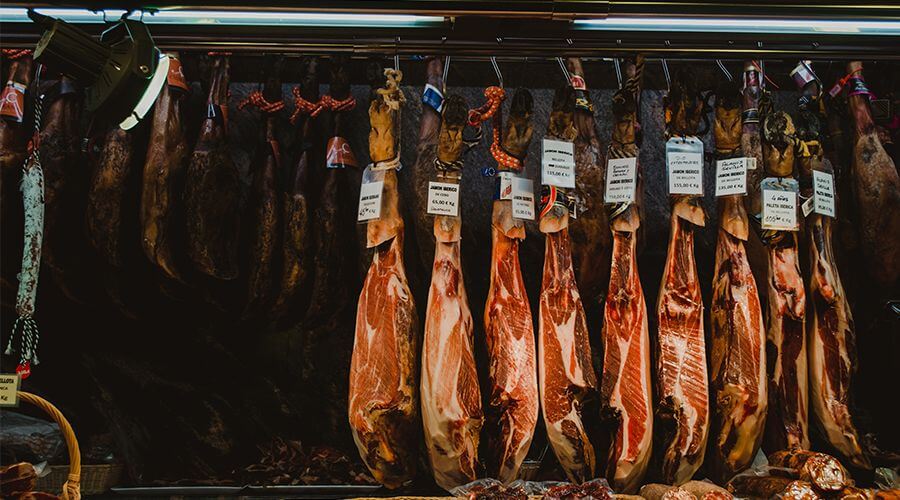 To understand the differences between hams is not easy and one of the first things to know is to differentiate jamón ibérico and jamón serrano. The jamón ibérico or dry-cured ham is the one made from native swine from the Iberian Peninsula and it has a minimum content of 50% pure Iberian pork, while the Serrano ham refers to meat from a white race of swine, which is cured in a cold and dry climate. When you go to eat out in a restaurant after your Spanish class in the Spanish school, do not get confused when ordering the ham, which can be identified by its dark skin and its black foot (pata negra).

Within the category of Iberian ham, we can differentiate a series of subtypes depending on the amount of acorn they were fed with; the acorn ham (the pig is raised in the woods and fed mainly with an acorn) or fattened up pig (the pig is raised in a feedlot and only eats feed). Depending on the region where the ham is produced, it will also have a different protected designation of origin, among which Huelva, Guijuelo or Dehesa de Extremadura. If you are in any of these places to learn Spanish do try the best types of ham in Spain.

The Iberian ham is a very nutritive ham, always used in recipes, and we advise you to have it only with a glass of good wine and a piece of bread, if possible, with a little good virgin olive oil on top.

Several studies say the acorn Iberian ham is good for the health, as the way Iberian pigs are raised along with their genetic conditions helps reduce cholesterol levels.

You do not have any excuse anymore not to add Iberian ham to their diet and enjoy Spanish gastronomy’s biggest treasure.

The Iberian ham, king of Spanish gastronomy
Rate this post!