It is one of the traditional dishes from the Spanish cuisine, mainly when it gets cold and we have to warm up in the morning before going out or to enjoy a sweet treat in the afternoon. Hot chocolate with churros is one of these Spanish habits that any foreign student coming to learn Spanish or a tourist usually enjoy during his stay. 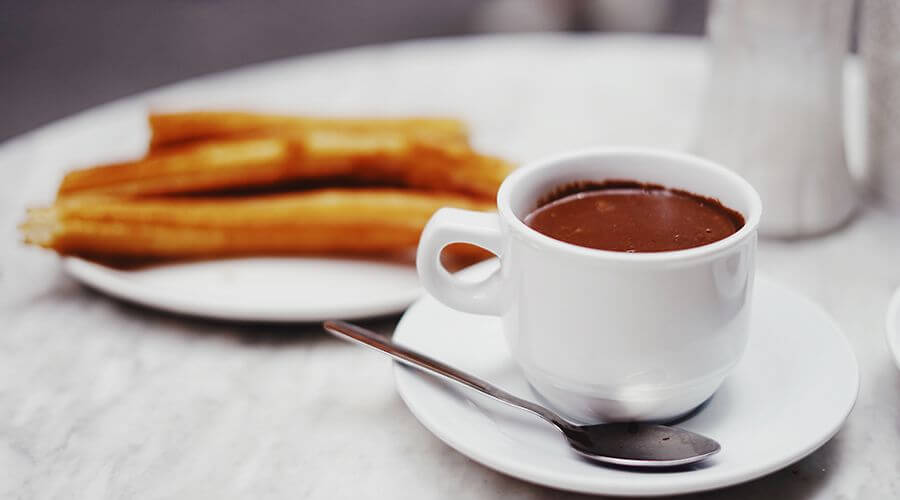 It is a tradition which is closely linked to Madrid, the Spanish city where it is consumed most, where having churros and hot chocolate for breakfast goes back to the XIXth century. History says that this tradition first started in Cataluña, or that the Arabs brought it to the peninsula, but in reality, nobody really knows when and where this pair got popular for breakfast, in Spain.

Hot chocolate with churros is not only traditional in our country, it also is in other Spanish speaking countries such as Mexico, Argentina, Colombia, Chile, Uruguay, and Venezuela. Many of these countries added a personal touch to the dish such as the churros filled with dulce de leche (milk based caramel sauce or candy) Argentinians love so much or the ones covered in sugar and cinnamon from Colombia.

In Spain, another very traditional way to eat this dish is to go in the temporary churrerías placed in the festivities of a city or town, and which are always full when people get hungry, at the end of a long celebration night with friends.

So… when it gets cold in the city where you are undertaking a Spanish course in Spain or visit Spain for travel, you know that you can choose to have breakfast, a tea break or at the end of a long night of partying, a delicious hot chocolate with churros. Also, if you go to Madrid, visit the chocolatería San Ginés, a typical chocolatería with more than 100 years of service and tradition.

Paella, one of the favorite dishes in Spain

The best breakfast: hot chocolate and churros
Rate this post!