So was it the famous Antonio Gaudí (1852-1926) that created Barcelona? Numerous famed artists have been active in the course of 19th century in this ancient city of over 2,000 years old that clearly gives a “no” answer for this question. Much of the precious works in this Spanish city, however, are from his contributions. If one has to enumerate all of the artists’ contributions, he’ll always be on top no doubt. The Temple of the Holy Family (Sagrada Familia) is one of his most popular buildings. It is described as sui generic – part neo-Baroque and part neo-Gothic, its structure almost defying its description they say. As an architect, he made the Park Guell on nearby Montjuic as one of his civil engineering projects. It has this gigantic lizard sculpture, well-known huge wavy bench, and some bits of mosaic tile – all of which lying in a 20-hectare lush greenery, truly one of Gaudi’s masterpiece! 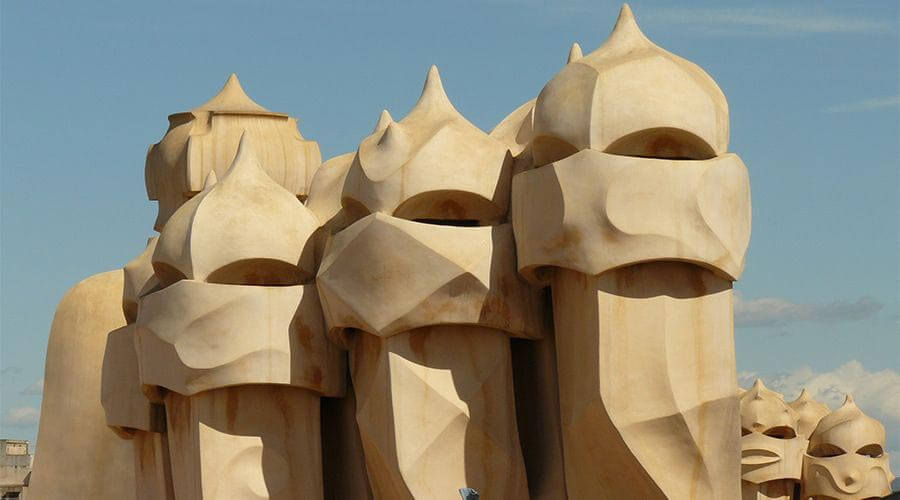 The Casa Mila or La Pedrera (The Stone Quarry) is frequently visited by tourists as well. It is now seen as a set of individual apartments but it was initially designed as a private house. Its exotic facade came from its organic, rolling balconies design, aside from the distinctive organic Gaudi elements spread all throughout the structure – from seaweed designed wrought iron, ice cream cone-shaped chimneys to the glowing attic. Gaudi is regarded as the Father of Spanish Art Nouveau, and he has built a couple of structures to prove that he is worthy of such title. Among which is the Casa Batllo, built in 1907.

Casa Batlló, just like the Casa Mila, Gaudi’s distinctive style is clearly eminent in this masterpiece. Its balconies are characterized by skull-like eye sockets merged in a colorful mosaic façade, creating a melting effect; its arched chimney is positioned in front of an orange clamshell roofline. No wonder it was chosen as one of the worthy treasures on the UNESCO World Heritage list.

Those unique organic shapes Gaudi incorporates have always served their purpose in his architecture, a technique also evident among Frank Lloyd Wright’s designs. Take the Colonia Guell chapel for instance. Notice how distinct the arches are – sharp-angled, organic decorations blending perfectly well into the basic structure, making a cave-like effect. Gaudi’s contributions will always be a sought-after attraction for both locals and tourists, even for a city filled with excellent structures. There’s no other way but to experience and find out why.

Bytheway did you know that one of Gaudi’s first work can be found at Place Real close to the famous Las Ramblas? He designed the lamp posts…

The 8 best things you can do in Barcelona

Gaudí and Barcelona, the Perfect Combination
Rate this post!