The city of Valencia starts preparing the celebration its inhabitants really look forward to, it brings the city to a standstill for some days every year, it attracts thousands of tourists from all over the world and students from the Spanish courses can enjoy its main elements, music, fireworks, light, and color… we are talking about the celebration of fire: the Fallas de Valencia. 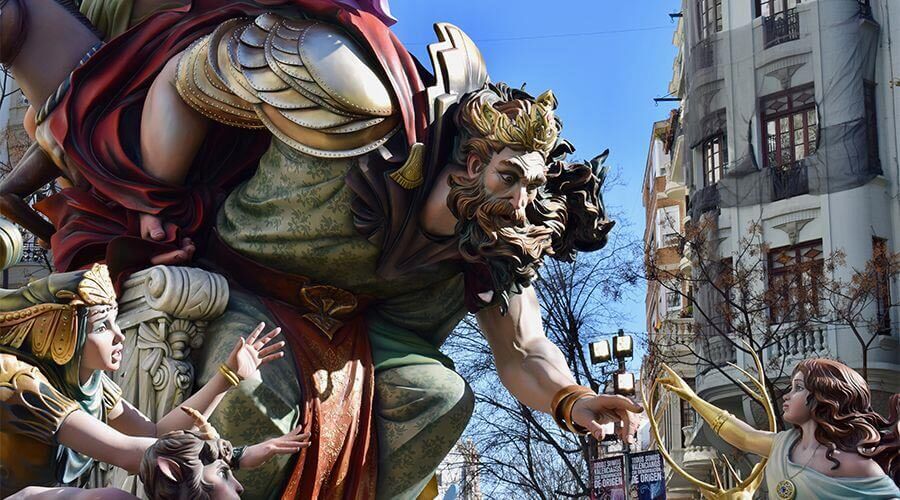 The Fallas is the most important and spectacular celebration of this city and it is a great tourist attraction, it was declared celebration of International Tourist Interest. The celebration is a tribute to San José, patron saint of carpenters, and it takes place between the 15th until the 19th of March.

Even if there are several acts taking place days before, the proper Fallas celebration starts on the 15th of March with the plantà, when the artistic monuments called fallas, which will be burnt down later, are raised. These monuments can be more than 30 meters high and show figures that usually offer criticism of a topical nature.

One of the events that students from the Spanish courses in Valencia like most, are the mascletàs. A show with fireworks based on the noise and the thunder of the firecrackers which usually lasts for about 5 to 7 minutes and always finishes with the so-called earthquake, when hundreds of firecrackers explode at the same time. The mascletà is celebrated every day, from the 1st until the 19th of March at 2 o’clock on the Plaza del Ayuntamiento of Valencia.

Over this period, students from the Spanish courses in Valencia can enjoy different activities and events carried out, from which the cabalgatas, the flower tribute in honor of the patron saint Virgen de los Desamparados, the firework castles and the nit del foc (the night of fire) stand out. All take place on the night of the 18th of March, during which firecrackers are thrown for more than 20 minutes in a great show of light, color, and explosions.

The high point of the celebrations, on the 19th of March, is the day of the Cremà, when all fallas monuments are put on fire, it is a show worth attending, very recommended for all students who are undertaking a Spanish course in Valencia that puts an end to the 5 intense and entertaining days of festivities.

Enjoy the Fallas in Valencia, the celebration of fire
Rate this post!