Another work of Art of Antonio Gaudi, Casa Milà or La Pedrera brings a sophisticated attraction to the streets of Passeig de Gracia. Built in 1906, Gaudi was commissioned by the richest man in Barcelona, Pedro Milà I. Camps to come up with a series of apartment houses that exemplify their religious beliefs.

Apparently, this grand architecture was named Casa Milà, after the man who sponsored its building. 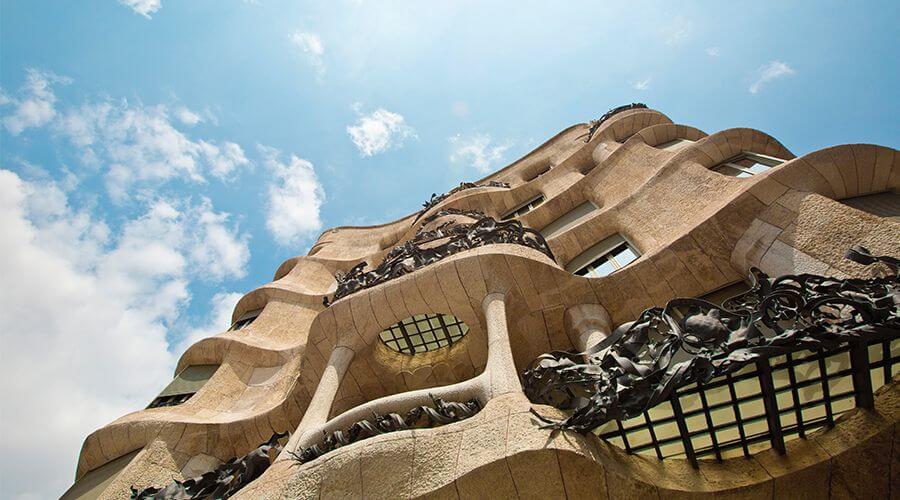 Although Gaudi was asked to conceal the religious themes of the apartment, he put all grandiose to the architecture of the establishment, thus, it is everything but simple. Upon its completion in 1910, the apartment complex had been given the name ‘The Stone Quarry,’ although anyone who had seen the spectacular creation believed otherwise. The people of Barcelona agree in saying that Casa Milà is nothing like a Stone Quarry.

A tour around the Casa Milà will bring visitors to their knees as they gaze at the curves surging through the corner of the lot. Waves embrace the exterior of the complex, perfectly complementing the iron railings that look like a generous amount of seaweeds. This cluster of seaweed-like railings ware the work of a sculptor named Josep Jujol. Looking up high above, the roof of the Casa Milà are orange-colored chimneys that resemble a swirl in motion. They say that “motion and aspiration” are the usual key terms used by Gaudi in his work.

Upon entering the magnificent threshold, one would conclude that the façade of the building is consistent with its interior. Such consistency is plausible to achieve from a man as talented as Antonio Gaudi. The ground floor is enveloped with bright colors and growing plants. These rich vegetation and organic elements have always present Gaudi’s art. Gaudi’s fingerprints are all over this impressive structure. As a matter of fact, there is a small room in the attic that serves as a mini-museum wherein Gaudi’s works are placed in honor of the patron architect.

True to the original intent of the sponsor, there is a replica of the Sagrada FaMilàia in one of the spaces of the apartment. The place itself where it is situated is a must-see.

With this overwhelming architecture, it is understandable that this extravagant structure holds witness to various significant gatherings. From the façade, and the interior to the rooftop which hosts a bountiful garden set along the chimneys, the Casa Milà is indeed a wonder to behold.

La Pedrera, the incredible house made by Gaudí
Rate this post!